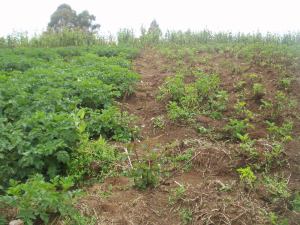 Potato consumption has increased dramatically in Sub-Saharan Africa in the past ten years as more people have moved to cities and have diversified their diets. Potato production has increased to meet the demand through the planting of more fields with potatoes which are encroaching on forestland. Potato yields remain low in Africa primarily due to damage from the late blight disease. Increasing farmer knowledge about late blight and the importance of fungicide recommendations could dramatically increase potato yields.

“Potato cultivars grown in Uganda have low levels of general resistance to late blight. As such, most commercial potato farmers rely on fungicide applications for control of Phytophthora infestans, the causal agent of late blight.

Potato has become an important staple and cash crop in the highlands of eastern Africa. These areas experience moderate temperatures (about 15–22°C) and receive relatively high amounts of rainfall (>1200 mm per year) that are favourable for potato production. However, these same conditions favour severe epidemics of late blight, and as such, late blight is a major limitation to potato production in high humid elevations.

In Uganda, potato late blight has been a serious problem since the introduction of the crop into the country in the early 1900s… During the 1990s, six varieties with resistance to late blight were released. However, resistance to late blight in these cultivars has since been overcome and significant yield losses experienced. Additionally, susceptible varieties are still greatly desired by farmers due to their good agronomic characteristics. Invariably, fungicides must be used to ensure disease control.”

Rust spores that land on wheat plants germinate and infect the plant withdrawing nutrients. Fungus tissue proliferates until the epidermis bursts and pustules erupt. Each pustule contains thousands of spores that can be carried by the wind to infect other plants. Stem rust damaged wheat crops on a massive scale in the early 1900s. However, resistance to stem rust was successfully incorporated into wheat in the 1950s. Resistance to stem rust in most breeding programs was through the use of a single resistance gene Sr31. In 1999, a new strain (UG99) was detected in Uganda on a wheat variety containing the Sr31 gene. Yield losses of up to 80% were reported. Fungicide use became essential.

“Stem rust, caused by Puccinia graminis, is a serious disease of wheat occurring frequently in warm and moist environments, which is typical of the wheat-growing areas in Kenya. Although the disease has been under control through widespread use of resistant cultivars, the reemergence of a new virulent race, TTKS, has reversed the gains made by breeders, posing a new and significant threat to wheat in the Eastern Africa region.

Widespread deployment and cultivation of resistant cultivars had generally provided adequate protection without the need for fungicides in the past. However, the ineffectiveness of resistance to the new race necessitates new interventions in the management of the disease as efforts to incorporate new sources of varietal resistance continue. All the current commercial wheat cultivars are highly susceptible to the new race, and it is not possible to grow a profitable crop of wheat without the application of a fungicide.”

Cotton is considered one of the most strategic commodities in Uganda for increasing household income, creation of employment, industrialization and poverty alleviation. In 1995 the Swedish International Development Agency began promoting organic methods of growing cotton in Uganda. The area under organic management expanded rapidly. Farmers were attracted to organic cotton because the promoters promised a premium price. Then, the reality of trying to grow cotton without chemical pesticides sunk in, shown below in remarks from a presentation by Jolly Sabune, Managing Director of the Cotton Development Organization.