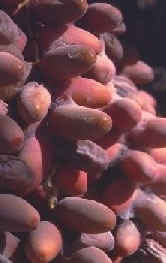 California ranks first in the nation in date production accounting for nearly 100% of all dates produced nationally. Banks grass mite has been a persistent pest of California dates since the early 1900s. Banks grass mite causes direct damage on immature green fruit by puncturing cells and sucking the juices from the surface of the fruit. The skin of infested fruit becomes hard and then cracks and shrivels. A heavy deposit of fine webbing is spun over much of the feeding area. The mites work extensively beneath the webbing. The mite population can double every 35 hours. Banks grass mite traditionally has been controlled by applications of sulfur. Frequent use of sulfur to control mites was effective until the late 1980s. Beginning then growers reported that sulfur was no longer effective and a replacement needed to be found.

“Riverside County is the number one producer of dates in California as well as the nation but successful, economical production is limited by Banks grass mite (BGM), the leading pest of dates in the state…. Dr. Peggy Mauk, UCCE Riverside County, was asked by area growers to find an alternative pesticide for controlling BGM. In one year of testing products she came up with an alternative pesticide, Savey…. After one season of testing, Dr. Mauk was able to get EPA to approve an emergency registration for Savey in California for the following season.

The miticide, sprayed with water once early in the season, gives season-long control. In the first year of its introduction, nearly 50% of the growers used it. Three years later over 90% of growers had traded in their dusting machines for sprayers so that they could use Savey…. Savey not only gives season-long control but is easy on the natural enemies (good bugs) and overall crop quality is ideal.

Albert Keck, Chairman, California Date Commission: “The California date industry has benefited greatly from the attention provided to it by the UCCE. Through the recent efforts of Dr. Peggy Mauk, the industry has successfully combated a devastating mite infestation, which if left unresolved would certainly have led to the demise of the industry.””