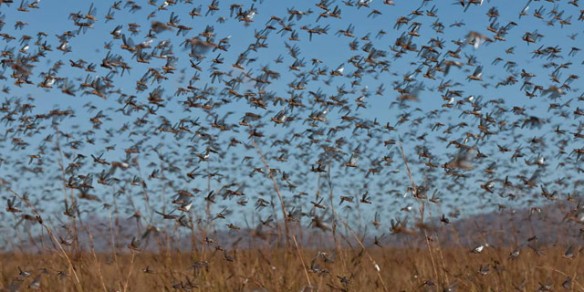 For many thousands of years, locust swarms have appeared in crop fields and farmers could only pray. Locust swarms may cover several hundred square kilometers during plagues and can contain 50 million locusts in each square kilometer. A locust plague has been building in Madagascar. Conditions for the locusts got better and better and then received a boost from a cyclone in February. The storm created ideal conditions for the locusts to breed. Without widespread spraying of insecticides, the locusts would devour most of Madagascar’s crops leading to millions of people going hungry.

“A locust control campaign has been launched by the United Nations and the Government of Madagascar to treat over 2 million hectares of infested areas in a bid to avert a food crisis that could affect some 13 million people in the island nation.

Aerial operations to identify and map out the areas requiring treatment by pesticides are expected to get underway this week, FAO said in a news release. In the meantime, ground surveys, conducted on a monthly basis since February, continue. Procurement of pesticides, vehicles and equipment for survey and control operations is also in progress. Spraying operations are expected to start in late October, after the onset of the rainy season.

An assessment mission carried out by FAO earlier this year found that rice and maize losses due to the locusts in some parts of the country vary from 40 to 70 per cent of the crop, with 100 per cent losses on certain plots. The agency estimates that losses in rice production could be up to 630,000 tonnes, or about 25 per cent of total demand for rice in Madagascar. Rice is the main staple in the country, where 80 per cent of the population lives on less than a dollar per day.”