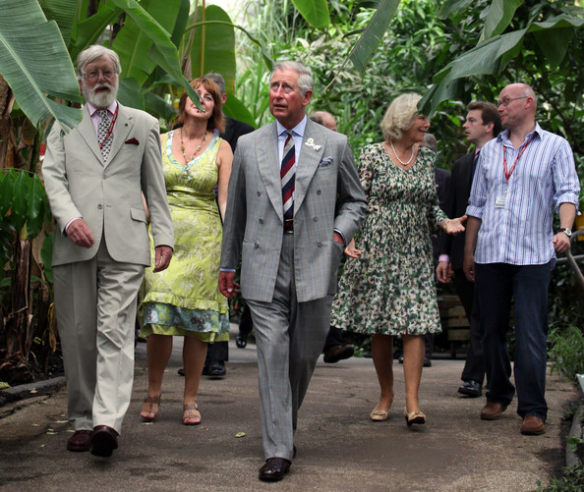 Duke And Duchess Of Cornwall Visit The Eden Project

Established in 1999, the Eden Project, near St Austell in Cornwall, has been an overwhelming success, attracting visitors from the UK and overseas to view some 3,000 plant species in three biomes.

The Eden project’s mission is to promote the understanding and responsible management of the vital relationship between plants, people and resources leading to a sustainable future for all.

Cockroaches were introduced into the RFB with some of the earliest plantings. The biome provided ideal living conditions for cockroaches with abundant leaf litter, temperatures of 25-30°C and mean relative humidity (RH) of 60% during daylight hours, rising to >90% overnight. From the start, cockroach control was contracted out to a pest control company, but by 2003 cockroach numbers were escalating and it was recognized that the control strategy was not effective.

“…populations of both cockroach species continued to increase overall. …the numbers of cockroaches had grown so large that rare young epiphytic plants such as orchids and many annual seedlings were being badly damaged on planting out. A survey using pre-baited cockroach traps was implemented, placing traps at 130 locations in the biome. From the resulting catches, the population was estimated at 774,000 individuals. …Of particular concern was P. australasiae being caught on traps placed in the catering areas adjacent to the RFB.

The only viable alternative was to use pesticide-fortified baits, two of which were available for immediate use in the UK: fipronil and hydramethylnon. …Baits were first applied in the RFB in November 2005 and in the first six months 3350g of bait were used. The treatment had an immediate and dramatic impact on the population of P. australasiae, whilst gradually reducing the population of P. surinamensis to manageable levels. In addition to the baiting programme, monthly sprays of lambdacyhalothrin were applied to an ‘exclusion zone’ consisting of the boundaries between the RFB and the catering areas and the entrance footbridge that connects RFB to a large café where the presence of cockroaches would be unacceptable.

With reduced cockroach populations, control treatments were switched in 2008 from baits to spot spray treatments using lambda-cyhalothrin applied when needed to population hot-spots, usually of 5-10m radius around the ‘hot’ traps, identified using the population distribution maps. The monthly treatment of the ‘exclusion zone’ has remained unchanged.”

The Eden Project was designed as a world class visitor destination to celebrate the interdependence of plants and people and to educate people about the need to care for the world that cares for them.

The project site, located in a recently decommissioned china clay quarry near St Austell, Cornwall, UK, is 105 hectares in size and consists of two large enclosed biomes set in gardens (outdoors biome) along with an educational resources building (the core) and a visitor reception building.

With two large indoor biomes covering the humid tropics and warm temperature climates, the outdoor biome with a range of temperate environments, plus several catering facilities, a warehouse and a waste recycling yard, pest management at Eden is very broad with many challenges in all areas.

Despite the procedures put in place for interception, a steady stream of introductions of pest and non-pest invertebrate species has occurred in the RFB.

“Unfortunately, during the early years of the project a number of non-indigenous pest species were introduced into the Rain Forest Biome (RFB) and not successfully eliminated. Currently there are five species that are the subjects of a containment notice issued by DEFRA; banana borer, banana aphid, atratus white fly, coconut mealybug and latin aphid. The containment notice dictates that the Eden Project has to monitor the populations of these pests and maintain pesticide programmes to control their populations.

In January 2002, adults of Tobacco White Fly were detected on leaf samples collected from the RFB. This discovery instigated the placement of an eradication order by DEFRA which initiated the immediate implementation of monitoring and a chemical control programme.