The sunn pest are a group of insects representing several genera of the shield bug and stink bug families. The sunn pest lives for one year and produces a single generation per year. About three months are spent feeding in wheat fields. The rest of the year is spent resting and in hibernation on hillsides which are usually about 10-20 km from the wheat fields. In spring, the surviving adults migrate down to the wheat fields in one non-stop flight and, after feeding, mate and lay eggs. The adults of the next generation appear and feed intensively in order to accumulate fat reserves for the hibernation period. They return to the higher elevations following wheat harvest.

Sunn pest feeding on wheat results in yield loss as most of the kernel contents can be sucked out by the insect, resulting in smaller, lighter, and shriveled kernels. In addition, the sunn pest injects digestive enzymes to liquefy the wheat tissues into a nutrient-rich slurry.

In some countries, foliar applications of insecticides to control sunn pest are made by air by governments, while in others, ground sprays, partially supported by the government, are made by farmers. A single spray will often suffice to control populations effectively.

“One of the most significant limiting factors in the production of wheat and barley in many areas of the world is the Sunn pest, Eurygaster integriceps, which causes severe damage to cereal yield. This insect has been observed in >15 million ha of wheat and barley farms, which extend from northern Africa, throughout the Middle East and western Asia, to central Asia and some parts of Russia. The Sunn pest feeds preferentially on wheat. Thus, its damage to wheat is considerably greater than that to barley (i.E., it often causes losses of 20-30% in barley and 50-90% in wheat).

In recent years, considerable efforts have been made to biologically control this pest. However, pesticide application is the main method of Sunn pest control in areas where infestation is high.”

Author: Rahimi, V. and A. R. Bandani.
Affiliation: University of Tehran, Iran.
Title: Comparison of the effects of cereal and legume proteinaceous seed extracts on a-amylase activity and development of the Sunn pest.
Source: Journal of Asia-Pacific Entomology. 2014. 17:7-11. 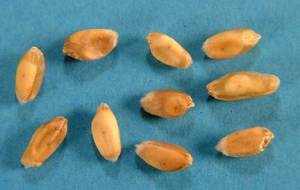 Italian bread dough is famous for its high quality. Several insect species feed on the wheat plants in the field and when they do, they leave a little saliva behind, which would lower the quality of the bread if insecticides aren’t used.

“Several species known as sunn pests or cereal bugs, have long been recognized as detrimental to wheat bread-making quality in south central Europe, western Asia, and northern Africa. … In Italy, severe infestations of sunn pests have been reported in southern regions and also, although seldom, in the Po Valley.”

“For a long time, it has been recognized that damaged grains can show a discolored area around the point of stylet penetration and that flour derived from damaged kernels produces sticky dough and poor bread. The detrimental effect on baking quality is obvious even in presence of 3-5% damaged kernels and dramatically increases for values higher than 10%. The quality depletion is due to proteolytic enzymes injected in the kernels by insects via their saliva that persist in the flour after milling and cause breakdown of gluten structure in the dough.”

“Presently, no sources of resistance to E. Maura in Italian germplasm are known; thus the only way of reducing the damage is chemical pest control in the field.”