Patulin is a mycotoxin that is produced by certain species of molds that may grow on a variety of foods. Patulin does not appear to pose a safety concern with the exception of apple juice; patulin present in apple juice survives the pasteurization process.

The US FDA conducted a review of the toxicological studies on patulin and this found that patulin is toxic upon repeated administration of oral doses around 1.5 mg/kg body weight (bw), which caused premature death in rats.

“In March this year, a consignment of Australian apple juice was tested in Japan and found to have unacceptably high levels of the toxin patulin in it.

The initial critical control point for reducing the risk of patulin contamination of apples is the control of P. expansum in the orchard.

In recent times P. expansum has been well controlled in the orchard and in postharvest by applications and drenches of Benomyl and its related fungicide carbendazim. Unfortunately these products have been removed from the market due to pesticide safety concerns such that the risk of high levels of mycotoxins on the fruit has increased.”

Almeria is located in the region of Andalucia in southeastern Spain. It has an average temperature of 68° and about 3000 hours of annual sunshine. Vegetable production in greenhouses has increased dramatically in Almeria. At present, about half of the total production from this area is exported to the European Union, especially Germany, France and the Netherlands. Almeria has become very competitive because it is relying on selling via high quality and not on low prices. Spain will try to improve its export position by increasing its market share in other parts of the world. Not only are prices competitive from Spain, but also the quality of Spanish produce is excellent. Needless to say, moldy vegetables are not acceptable for export from Spain and the greenhouse crops are intensively sprayed with fungicides.

“Botrytis cinerea, is the causal agent of grey mould, one of the most important diseases of crops in Almeria, a region in south-east Spain where unheated plastic greenhouses cover an area of approximately 33.560 ha. Botrytis cinerea attacks a wide range of plant species in temperate zones and causes grey mould on many economically important crops such as vegetables, ornamentals, bulbs and fruit. Chemical control is the primary method for grey mould control, with alternative fungicides applied every 10 days, from November to March.” 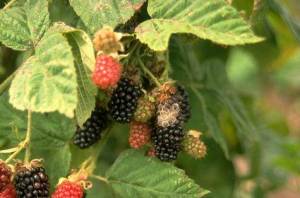 The German population has access to high quality strawberries, blueberries and raspberries that are grown in the country every year. However, the climate in Germany is conducive for the growth of mold in the berry fields making fungicide use necessary.

“Small-fruit production is an important component of Northern German agriculture, covering some 4,000 ha of strawberry, 100 ha of raspberry, and 1,500 ha of highbush blueberry as well as smaller acreages of redcurrant, gooseberry, and blackberry. Under the cool and humid regional climatic conditions, several fungicide treatments at bloom are essential in order to control phytopathogenic fungi, notably the gray mold pathogen Botrytis cinerea.”

Chile leads the world in the export of table grapes. A major challenge for Chile is the distance from the fields to the export markets. The long distance makes necessary having grapes of extremely high quality that can endure the trip and have a long shelf life. Botrytis is a disease that severely affects stored table grapes because it can infect the grapes in the field and then continue to grow in the berries’ storage, producing nests of gray-white fungus. Botrytis is common in Chilean vineyards, so the development of mold is prevented by the use of fungicides.

Four species of mealybug feed on grapes in California. They suck out plant content and excrete unused plant material. The result is a layer of sticky, wet honeydew on which thick, black, sooty mold grows. The strict quality standards set by the grape industry and demanded by consumers have led to a dependence on insecticides for controlling mealybug populations.

“Although more vineyards are becoming infested, populations within infested areas are declining because the judicious use of insecticides has successfully lowered mealybug populations in areas that are infested.”

“Season-long control programs for vine mealybug are typically comprised of a combination of insecticide treatments assisted by biological control. … Promoting parasites is very important because they are active late in the growing season and can reduce vine mealybug populations before the pest begins to move to the lower part of the trunk after harvest [where they are protected from insecticides].”