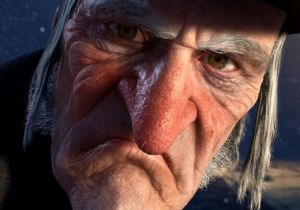 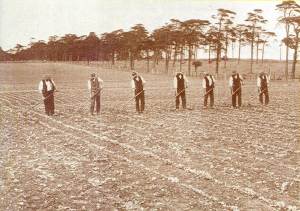 Dickens’ fictional character Ebenezer Scrooge believed that young people should work. By not working, he considered the unemployed as “surplus population.” Organic farms require more labor particularly for jobs such as weeding fields by hand since herbicides are not used. Recently, an organic ag advocate in the UK invoked the name of Ebenezer Scrooge to explain how organic ag could make use of the current “surplus population” by putting the unemployed to work in the organic fields.

“Yet if Britain practiced Enlightened Agriculture based on small, mixed, quasi-organic farms we could easily be self-reliant in food. We could also employ all of the three million who are now unemployed, including or perhaps especially the one million unemployed under-25s, in jobs far better than the shelf-stacking and mail-order cold-calling that are now on offer. Instead we produce only about half our food while politicians wring their hands over what Ebenezer Scrooge in a remarkably similar economy called “the surplus population” who alas are left on the sidelines.” 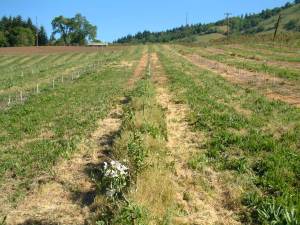 California farmers produce 550 million pounds of avocados annually. 8% of the avocado acres are managed with organic production practices. A recent economic analysis by the University of California shows why so few avocado acres are organic. Even though organic avocados receive a price premium, lower yields (15% lower) means lower profits than avocados grown with chemical inputs. The 15% lower yields would mean a loss of 82 million pounds of avocados if all the California avocado growers switched to organic practices. Weeds are the biggest problem for organic avocado growers. 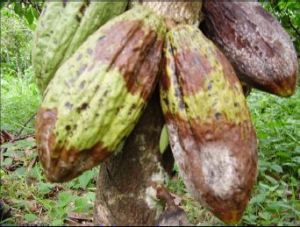 70% of the world’s supply of cocoa, a key crop for producing chocolate, comes from small farms in West Africa. In this hot, moist tropical environment, cocoa trees flourish but so do organisms that infect the cocoa pods causing diseases-particularly black pod disease. Fungicides are used to a limited extent by West African farmers, but they are not sprayed often enough to prevent the disease organisms from causing significant damage. As a result, African cocoa yields and farmer incomes are low. Research has shown that for optimal yields and income, West African cocoa farmers need to spray fungicides more frequently as a recent economic analysis determined…..

“Essentially fungicides were not overused – in most cases, it was shown that net returns could be increased by using more fungicide in the study area. Specifically farmers in Osun State would have to double their current use rate to optimize fungicide use while their counterparts in Ondo State would have to triple theirs to achieve the same goal.

Based on the results of this study, it is suggested that cocoa farmers increase the quantity of fungicide used per hectare as the ratio of the marginal productivity to unit cost of fungicide is greater than unity among the respondents.”

Most cropland in the UK is treated with pesticides to prevent diseases, insects and weeds from lowering crop yields. Without the use of pesticides, crop production would fall significantly resulting in higher prices for consumers. A 2010 study estimated the impact of the lower food production on consumer costs…

“This report estimates that without plant protection products, food security in the UK, and by implication in the EU and in most countries across the world, would be severely reduced and the cost of food would rise substantially. In the UK the cost of food would rise by about 40 per cent, increasing food and drink expenditures by some £70 billion per year and raised to the level of the EU this implies additional food expenditures of some £750 billion.”

Author: Séan Rickard
Publication: The Value of Crop Protection: An Assessment of the Full Benefits for the Food Chain and Living Standards. 2010 Report from the Crop Protection Association.

UK apple growers produce about 400 million pounds of apples per year. About 18 insecticide and fungicide sprays are made yearly to control pests including scab, mildew, aphids and codling moth. By applying a full spray program, good growers have restricted losses due to pests and diseases to very low levels, usually no more than 1-2%. Below, an economic cost-benefit study determined the likely effect on UK apple production if growers did not use pesticides…

“Apples are the most important fruit crop in the UK in terms of area of production and require relatively high levels of pesticide inputs. … If pesticides were not used, apple production would thus not be commercially viable, and the market shortfall would be made up by imports at a similar price. With a negative gross margin apple producers would leave the industry and find other uses for their land.”

In Italy, herbicides to kill weeds in crop fields have been routinely used on almost all the acres for the past 30 years. Is the cost of the herbicide application justified considering the levels of weed infestation? Italian researchers examined the record…

“The frequency distribution of yield loss due to weeds in winter wheat, sugar beet, maize and soybean has been studied using the available data of weed control trials undertaken in north-central Italy in the last 30 years. The breakeven yield loss and the probability of obtaining a positive net return from chemical weed control were calculated, considering different treatment options and different weed-free yields.”

“The profitability of chemical weed control depends on the density, composition and time of emergence of the weed flora, on the competitiveness of the crop and on the chemical used. In most cases, however, it is profitable to spray; in other words in the Po Valley there is a high degree of probability that the weed density is sufficient to bring about a yield loss greater than the treatment cost.”

France is the second largest European producer, behind Germany, of radishes. Each year, France produces 48,000 tons of radishes. Damage to radishes from root maggots must be prevented in order to produce a marketable crop. But since 2007 no insecticide has been registered in France for use against root maggots. Emergency uses of unregistered insecticides have preserved the industry. A recent analysis calculated the economic costs of not having effective insecticides available.

“The additional costs caused to replace a chemical treatment by a manual operation (manual sorting at harvest) is calculated at 6,905 €/ha. At the sector level, the lack of availability of a registered plant protection product against vegetable flies would thus lead to a direct loss of 18,600,000 €. This loss in profitability seriously impacts the viability of the radish production sector in France and puts at the stake the employment directly and indirectly involved in this sector. To give an indication, in Loire-Atlantique this sector has significant weight representing 2,500 FTEs (Full Time Equivalent). … The risk of distortion of competition in the French radish production sector is real vis-à-vis other European countries where pressure of the vegetable flies is less.”

Publication: Economic damage caused by the lack of plant protection products against root maggots in radish production in France. In: Study on the Establishment of a European Fund for Minor Uses in the Field of Plant Protection Products. June 2011.
Project Leader: ARCADIA International