In 2008, the apple flea weevil emerged as a serious pest in Michigan’s organic apple orchards with some growers experiencing >90% crop loss. The organic apple growers were spraying insecticides later in the season to kill major pests like the codling moth and the flea weevil emerged as an early season pest. The weevils feed on developing buds and leaves. Heavy populations cause significant defoliation of leaf tissue resulting in a lacelike pattern which leads to decreased productivity and possible tree death. Research at Michigan State University led to a solution for the organic growers- spray an insecticide…..

“Organic apple growers in the Midwest appear to have a relatively simple solution to their problems with apple flea weevil, which appeared suddenly as a problem in Michigan two years ago and took out 90 percent of the fruit in some orchards.

The best solution, entomologists say, is to spray Entrust (spinosyn) very early in the season, at green tip to pink… The apple flea weevil adult does its most serious damage by feeding on and destroying fruit buds before they have a chance to emerge in the spring.

John Pote, a graduate student at Michigan State University working with Dr. Matt Grieshop and Dr. Anne Nielsen in the organic pest management laboratory, gave the good news to organic growers during a session at the Great Lakes Fruit, Vegetable, and Farm Market Expo in Grand Rapids, Michigan, in December.

Pote noted that the weevil emerged as a problem for organic growers, who normally do not apply insecticides that early in the season, since few insects become active so early.

In conventional apple management programs, the weevil is likely incidentally controlled by insecticide applications made to kill other insects either in April—when overwintering weevils emerge—or in early July—when the summer generation emerges from leaf mines.” 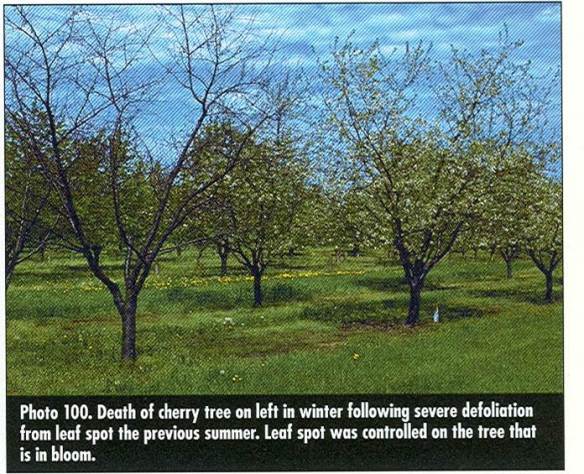 Leaf spot is the most important fungal disease of cherry.  The disease is caused by a fungus known as Coccomyces hiemalis which lives over the winter in the old leaves on the ground.  The first infection of new foliage in the early summer is caused by spores which are discharged from these old leaves.  After the fungus develops on the new leaves, more spores are produced and they may cause further spread of the disease.  Defoliation from leaf spot reduces the number of flower buds and subsequent fruit set for the following year.  Defoliated trees are less cold hardy and may be killed by low temperatures in winter.  Conventional and organic growers who spray regularly and thoroughly every year seldom suffer any serious loss from leaf spot. However, since the spray materials available for organic growers are not as effective as the synthetic chemicals used by conventional growers, the organic growers have to spray more often.

“Cherry leaf spot (CLS)… occurs worldwide and is the most prevalent disease of sour cherry in temperate zones. Epidemics caused by ascospore followed by repeated conidial cycles cause defoliation by midsummer, resulting in low fruit quality. Early defoliation delays acclimation of fruit buds and wood to cold temperatures in the fall, and reduces fruit bud survival during severe winters and fruit set the following spring.

In integrated sour cherry orchards, CLS management typically involves four to eight fungicide treatments per year, starting at petal fall and continuing until late summer. In organic orchards, only a few approved fungicides are available for CLS control, such as sulfur and copper compounds. These compounds are often less effective and more phytotoxic than synthetic fungicides used in integrated fruit growing. Therefore, in Hungarian organic sour cherry orchards, 7 to 12 sprays are applied against CLS in each season.”