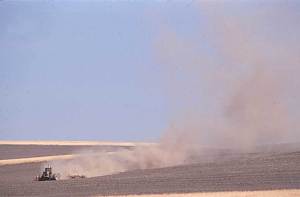 Health effects of breathing dust can be major. When inhaled, small dust particles can travel easily to the deep parts of the lungs and may remain there, causing respiratory illness, lung damage, and even premature death in sensitive individuals. People in California are exposed to unhealthful levels of small dust particles more frequently than to any other air pollutant measured. California farmers have minimized dust emissions by using herbicides to reduce weed populations instead of plowing the dry soil.  However, organic farmers do not use herbicides and cultivate their fields which results in significant increases in respirable dust in California.

“Respirable dust (RD), defined as particles smaller than 4µm diameter, was collected at the implement from 29 farming operations performed for furrow-irrigated tomato, corn, and wheat crop production over a 2-year period. …Among the cropping systems studied, those that required more tillage or land preparation to be performed when the soil was driest produced the most RD.