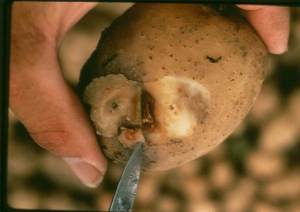 The fungus p. infestans was first found in Europe causing the late blight rot of potatoes in the 1840s. In 1845/1846 the fungus destroyed all the potatoes in Ireland and 1.5 million people died. The fungus spread throughout Europe and caused potato crop failures until the late 1800s when the use of copper was found to be an effective fungicide for protecting potatoes from infection by p. infestans. The use of copper as a fungicide spray on potatoes became widespread throughout Europe in the early 1900s. However, in Germany during World War I, all the copper was requisitioned for making bullets. The German civilian population had become dependent on potatoes due to shortages of other foods. A late blight epidemic destroyed Germany’s potato crop in 1916 due to the lack of protection with a fungicide.

“…the last major famine caused by P. infestans occurred in 1916 during World War I. It resulted in the deaths of 700,000 German civilians, who were unable to protect their potato crop because copper was needed to produce bullets, rather than fungicides. Even today, more than 170 years after the Irish epidemic, frequent applications of fungicides are necessary to grow potatoes in moist climates, and losses occur even in dry areas, such as Israel and the western United States. Potatoes remain a fungicide-intensive crop, despite more than 150 years of study of P. infestans and the disease it causes.”