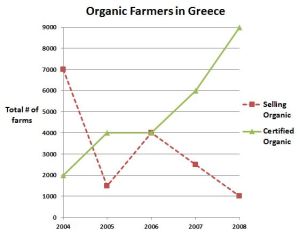 Organic farming regulations are implemented by EU Member States mainly through the provision of financial support to farmers. There has been an increase in the areas under organic management in most EU countries, which is probably related to the direct effect of financial support. Greece is an important country with respect to organically cultivated land and has one of the highest rates of increasing organic areas in the EU. However, Greek organic products are very difficult to find in the market, and sales are extremely low. In other words, only a small amount of organic products are labeled and sold as organic products. Since farmers were willing to switch from conventional to organic agriculture, with the procedure to obtain the organic label being quite simple for farmers to follow, why are so many farmers not enthusiastic about certifying and labeling their products as organic?

“In Greece, organic farming was majorly promoted through the provision of subsidies to farmers, i.e., since 2004. An average organic farmer in Greece has one of the highest per hectare support compared to other countries. However, subsidies are provided with no limitation regarding crop type, geographic region or other more specific characteristics. It is very likely that farmers are not selecting organic management for ideological reasons, but are driven by financial incentives to receive the available subsidies… In any case, when the organic agricultural sector operates in this way, it stops at the farm, resulting in it being short term and highly unsustainable, as it is completely dependent on direct and uninterrupted financing.

Consequently, since organic farming is made profitable because of subsidies (sometimes double, as in the case of wheat), it is much easier for the farmers to sell organic products as conventional products in a market that they are already familiar with.

As the majority of EU Member States offer per area payments for the conversion and/or maintenance of organic land, the “Bio without Bio”, i.e., organic farming – without organic products case of Greece, is probably not an exception.”