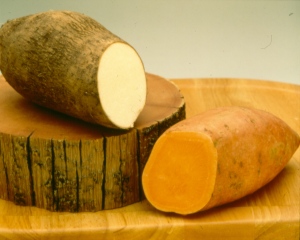 The dominant zone for yam production in the world is in West Africa, where about 93% of the world’s production occurs. Yam is a major source of calories for millions of people. Yam produces the highest amount of food calories and protein annually per hectare. Currently, yam farming is very labor-intensive and the crop is in decline.

As far back as 1982 several authors, as summarized by Diehl… predicted a future decline in yam production based on economic and agronomic considerations. The major issues were shortage of labor, in view of the labor intensive nature of yam cultivation… limited availability of seed yams; declining soil fertility associated with reduced fallow periods; and a reported shift in demand to cheaper commodities in some areas.

More recently a mathematical model, based on FAO data, predicted that yam production could decrease dramatically over the next 15 years. They attributed the predicted decline to a combination of high costs of production, inadequate yields, losses in storage and unfavorable prices to farmers.

The cost of labor in yam cultivation (about 40% of total variable cost) is high and increasing. Yam farmers are ageing and have increasing difficulty in coping with the challenges of cultivation. Increasing urbanization is leading to increased labor shortage and cost. Yam production systems will benefit from:

…increased use of mechanization and other labor-saving practices (e.g. use of herbicides).”