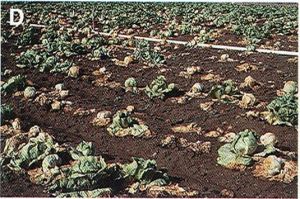 The fungus causing lettuce drop causes a rot that usually begins on the stem near the soil surface and a water-soaked area appears; it can spread downward until roots decay and can spread upward.  The pathogen rapidly ascends the stalk, killing the leaves in succession until it reaches the heart of the lettuce plant. Layers of collapsed leaves lie flat on the soil surface after infection. Inner leaves are invaded completely by the fungus, which reduces the head to a wet, slimy mass. The entire plant may collapse in less than two days.

“Lettuce drop is one of the most destructive diseases of lettuce and has been reported in all lettuce-growing regions of the world. In the USA, the disease regularly occurs in the two primary lettuce-producing states of Arizona and California. Yield losses vary from 1% to nearly 75% depending on conditions, but under ideal disease conditions an entire field may be lost. The disease is caused by two closely related soilborne fungi, Sclerotinia sclerotiorum (Lib.) de Bary and S. minor Jagger.

Sclerotia of S. sclerotiorum can survive up to seven years and their longevity is affected by location of sclerotia within the soil profile, duration of burial and soil temperature and moisture.

Commercially acceptable cultivars with adequate levels of resistance are not currently available. Thus, current management strategies for lettuce drop rely primarily on fungicides such as iprodione and boscalid.”