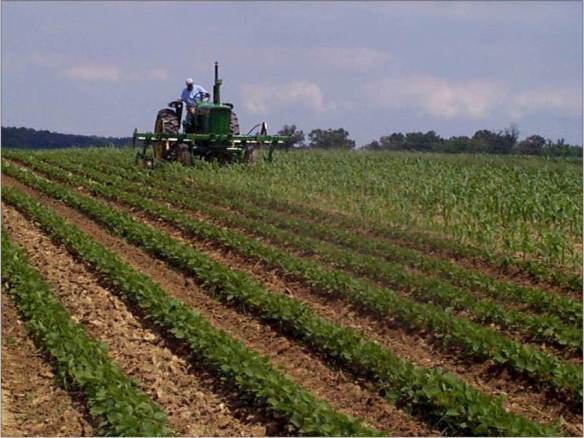 In 1996, The Farming Systems Project was established at the USDA ARS Beltsville Agricultural Research Center in Beltsville, Maryland to compare the performance of conventional and organic production systems. In the conventional systems, herbicides are used to kill weeds while in the organic systems, up to seven tillage operations are used to kill weeds. Tillage equipment loosens the soil and leaves it bare and susceptible to erosion when it rains. The USDA researchers estimated that the organic plots lost five times more eroded soil than the plots that were not tilled and where herbicides were used. A point made in a recent highlight article…..

“Tillage is used to bury the previous year’s crop residue and destroy weeds. But in no-till farming, herbicide removes the weeds and the new seed is sown directly into the stubble of the last crop.

No-till systems also win hands-down when it comes to hanging on to soils. An 11-year farming experiment by the U.S. Department of Agriculture in Beltsville, Maryland, compared crops grown in three ways: conventional tillage, organic methods, or no-till. Compared to the conventionally tilled plot, the organic plot was likely to hang on to 30 percent more soil. But compared to the organic plot, the no-till plot hung on to 80 percent more soil.

David Pimentel is a Cornell University entomologist who has written much about the negative environmental impacts of pesticides. Nevertheless, “I’d take chemicals over soil erosion any day,” he says.”