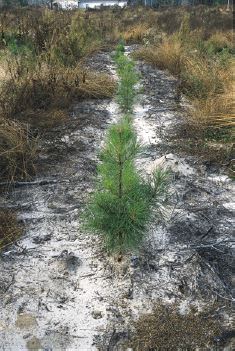 Loblolly pine is the most important and widely cultivated timber species in the southern United States. Because it grows rapidly on a wide range of sites, it is extensively planted for lumber and pulpwood. Loblolly pines are planted and managed for their fast growth rates. Unmanaged loblolly pine stands can take up to 50 years to mature into sawtimber-size trees. Managed stands can generate sawtimber-size trees much faster, often within 25 to 40 years. During the past twenty years, study after study has reported large gains in growth due to control of competing vegetation (weeds) in pine plantations in the southeast. Herbicides do a great job of getting the trees off quickly while alternatives for controlling weeds (burning, cultivation) have fallen from favor.

“The United States harvests approximately 708,000,000 m3 of wood annually, the highest rate of timber removal of any nation. …The 13 southeastern states (collectively referred to as the South) sustainably produce 60% of the forest products in the United States, more timber products than any other country (outside the United States) in the world.

One crucial component of intensive silviculture is the use of herbicides to control competing vegetation. Herbicides are applied to an estimated 2.0 million acres annually in the South, primarily associated with loblolly pine plantation establishment and stand management. Prescribed burning for vegetation control has declined during the past 2 decades, primarily due to concerns about liability from fire escapes and smoke management. Mechanical site preparation has also declined as more existing plantations and fewer naturally regenerated forests are harvested and replanted. Mechanical site preparation can also cause accelerated erosion losses. Replacing mechanical site preparation practices with herbicide applications lowers the potential for sediment and nutrient pollution of surface waters.”