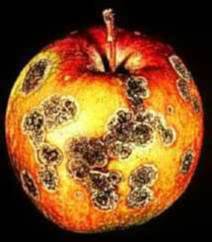 The Swedish government set a goal of having 20% of the total crop area grown organically by 2010. Organic fruit acreage did not make the goal and is still less than 5%. Growers fear low yields and poor quality by not using chemical pesticides in organic systems. Apple production would decline significantly in Sweden if the majority of growers gave up the use of pesticides and used organic methods. A major problem for apple growers in Sweden is apple scab.

“There is a large demand for domestically grown apples in Sweden. However, approximately 85% of the apples consumed in Sweden are imported, and the percentage of imported organic apples is even higher. Organic fruit is produced on 4% of the orchard area.