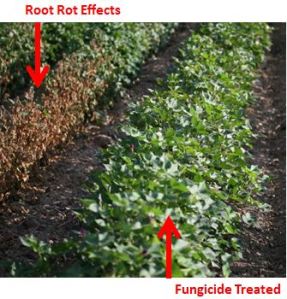 Cotton Root Rot is a highly destructive disease caused by a soil borne fungus in the southwestern U.S. The fungus penetrates the roots of the cotton plant and blocks the flow of water from the roots to the leaves for transpiration, causing the leaves to wilt. Plants infected early in the growing season die before bearing fruit, whereas infections occurring at later plant growth stages reduce cotton yield and quality. Cotton Root Rot has plagued the cotton industry for more than 100 years. Despite decades of research, effective methods to control the disease were lacking until recently……

“On February 2, 2012, the US Environmental Protection Agency approved a section 18 label for Texas for the fungicide Topguard (flutriafol), to control root rot of cotton (CRR) caused by the soil borne fungus, Phymatotrichopsis omnivore.

CRR is the major yield-limiting disease in many of the cotton-production areas of Texas, causing annual losses exceeding $29 million. Yield losses to individual growers vary greatly, but can range up to 100%.

CRR has been a problem of Texas cotton since the 19th century. The first experiments on control of this disease were published in 1888 and in spite of extensive research efforts since then, there has been no substantial progress, until our recent identification of flutriafol as an effective fungicide. In some of our field trials with strong disease pressure, the yield was increased by as much as 60%. The application is made as a liquid spray to the soil around the seed at planting.”