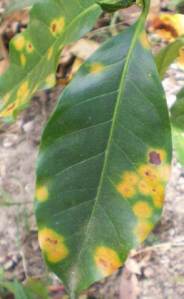 Coffee is the only known host of the fungus Hemileia vastatrix, which causes coffee rust also known as “roya”. The disease damages coffee leaves by causing the premature drop of infected leaves, which can lower yields by 50%.Coffee rust has become a greater problem for coffee growers because of climate change. Higher temperatures and increased rainfall favors rapid development of the disease.

“Costa Rica on Tuesday declared an emergency to tackle the spread of a coffee fungus that has already devastated Central American producers and looks set to destroy about 12 percent of Costa Rica’s planted coffee in the upcoming 2013/14 harvest.

Roya kills coffee leaves by sapping them of nutrients and lowering bean yields. The current roya pandemic has already affected other countries in Central America and Mexico, home to more than a fifth of the world’s Arabica coffee production.”