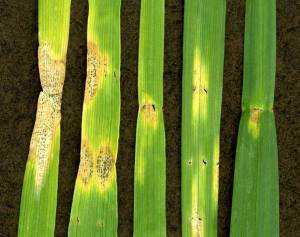 In the EU, where high levels of subsidy supports are available, wheat crops are grown in an intensive manner. In Europe, 11% of the world cereal production comes from only 6% of the world’s cereal acreage. Since the 1990s, more than 95%of wheat acres in the UK, France, Germany, Denmark, Belgium, and the Netherlands have been treated with fungicides. Average responses to treatment usually range between 0.5t/ha and 2.5 t/ha though where Septoria tritica blotch pressure is particularly high, yield responses of 5 t/ha are sometimes seen.

“Mycosphaerella graminicola is the causal agent of Septoria leaf blotch (SLB), an important foliar disease of wheat in Europe. Due to a lack of durable host resistance, disease control relies predominantly on the use of fungicides.”

“Yields of cereal crops in Europe are among the highest in the world and the levels and consistency of these yields is in no small part due to the use of fungicides to control the major fungal pathogens.”