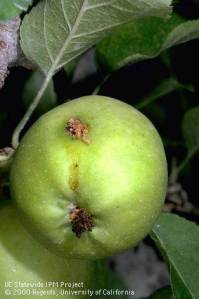 Chile is a major exporter of apples to other Latin American and Asian countries. Some of these countries do not have populations of the codling moth and they want to keep the insect out. Codling moth is present in Chilean apple orchards which means that growers must spray insecticides to assure that their export fruit shipments will not be rejected.

“Regular applications of insecticides have been the main management practice against codling moth in Chile. … Pest management in Chilean apple orchards with fruit grown for export is dependent on intensive pesticide use, mainly because of strong quarantine restrictions toward the codling moth from Asian and Latin America countries. In this production scenario, even low levels of fruit damage at harvest (<0.5%) are a major concern for growers. To avoid quarantine rejection of exports, an increase in the frequency of insecticide sprays has been observed.”