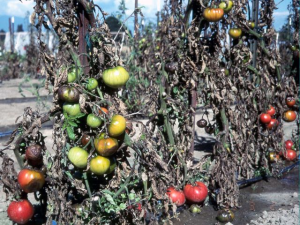 The late blight fungus infects both tomatoes and potatoes. The fungus attacks all the aboveground parts of the plant. Infected foliage becomes brown, shrivels, and soon dies. When severe, all the plants in a field may be killed in a week. On tomato fruit, greenish brown greasy spots develop and can cover the entire tomato. Decaying vines can be identified by a foul odor. Environmental conditions in Brazil are ideal for the development of the disease.

“Tomato and potato are the most important vegetable crops in Brazil. During 2002, production of tomato and potato in Brazil totaled 3.6 and 3.1 million tons, respectively. The major producing areas are the south and southeast regions, in which 57.2% of the tomato and 92.3% of the potato are produced. Late blight, caused by Phytophthora infestans, occurs in both regions and is the most serious foliar disease of these crops. The environmental conditions in these regions also are highly favorable to late blight development, leading to severe crop losses if no control measures are adopted.”

“Due to favorable environmental conditions and high susceptibility to late blight, up to 20 and 15 fungicide sprays commonly are used in tomato and potato crops, respectively.”